What happens at DARTS? Well, we tend to talk lots, network with like-minded people, eat some fantastic food, drink a bit of wine, explore the grounds of Dartington Hall and listen and cogitate on all of this:

In 2018 the conference theme was Back to Basics.

Read the Twitter #darts6 conversations for a flavour of the conference. We also have a DARTS6 conference Twitter moment compiled by @PhdGeek, and @Kiminthelibrary  Wakelet collation of Twitter posts.

Tweets from DARTS5 can be viewed here: https://twitter.com/hashtag/darts5 and pictures taken over the two days are here:  https://www.flickr.com/photos/141399603@N05/albums

During break times we had a series of research challenges displayed for delegates to ponder and comment on. This is what people said: 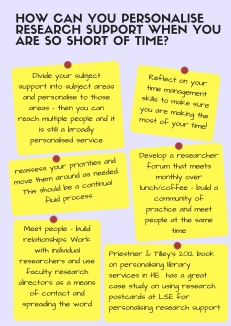 Check out the Twitter conversations from DARTS4 at: https://twitter.com/hashtag/darts4

One thought on “Archive”

From historical inquiry to elearning: understanding the metaliteracies and digital capabilities required of researchers of tomorrow | The (In)Visible Librarian said:
August 17, 2016 at 4:04 pm

[…] the INFORUM2016 workshop on Information Literacy and at the DARTS5 conference held at the beautiful Dartington Hall, I focused on ‘A framework for an online Information […]